Using a Crane in Rescue Operations

“Can I use a crane as part of my rescue operations?” 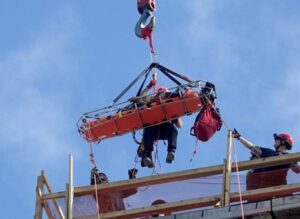 At Wm. O’Brien we’re often asked if a crane can assist in rescue, in particular for moving personnel or victims. Our answer is normally “No. Exceptions have been known to be made but in very rare and unique circumstances.”

The justification for using a crane in rescue operations to move personnel, even for the purposes of rescue should only be used as a last resort, or where there is no other practical means. The success of managing any emergency is often down to planning, preparation, and practice. In such cases where the use of a crane is the only practical solution, it is paramount to understand the risks and their limitations.

On the practical side, the use of a cranes in an emergency can be a tremendous asset to rescuers. It may also be part of a rescue plan for a confined space rescue and recovery, rescue from height and from water.

Legislation and Procedures
When using any crane for moving personnel, workplace safety legislation severely limits its use because of the dangers involved. In order to utilise a crane, properly manufactured and rated “personnel platforms or baskets” must be used. Personnel platforms that are suspended from the load line must have a safety inspection certificate and fall protection will be required for the personnel inside. A tag line is also recommended.

If a crane hook is to be used as an anchor point, i.e., for confined space rescue, all personnel involved would need to follow a specific Control of Hazardous Energy (Lockout/Tagout and Verification) programme. The equipment would need to be properly locked out, i.e., keys removed, power switch disabled, etc. You would also need to check the crane’s limitations as per the manufacturer’s manual. This is to ensure you are not going outside the approved use of the equipment.

Hoisting personnel by crane or derrick is prohibited on most sites except when no safe alternative is possible. The use of a crane for rescue should not provide an exception to these requirements unless very specific criteria are met. The hoisting of personnel is not permitted unless conventional means of transporting employees is not feasible, or unless conventional means present even greater hazards (regardless of whether the operation is for planned work activities or for rescue). Where conventional means would not be considered safe, personnel hoisting operations meeting the terms of this method could be authorised.

Emergency Planning
Preparing emergency plans and identifying what can go wrong in any job often requires good foresight and a certain level of expertise. From a legal perspective, being “unprepared for rescue” is not a legitimate basis to claim that moving a victim by crane was the only feasible or safe means of rescue. 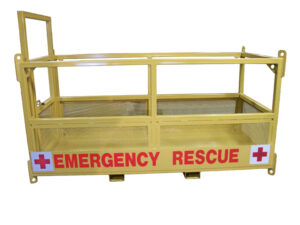 This is where safety legislation requires the employer to complete written rescue plans for permit-required confined spaces and for workers-at-height using personal fall arrest systems – or they must ensure that the designated rescue service has done so.

When developing rescue plans, it may be determined that there is no other feasible means to provide rescue without increasing the risk to the rescuer(s) and victim(s) other than using a crane to move the human load. These situations would be very rare and would require thorough documentation. Such documentation may include written descriptions and photos of the area as part of the justification for using a crane in rescue operations.

The plan must demonstrate that the use of a crane was the only feasible means to complete the rescue while not increasing the risk as compared to other means. Even then, there is a risk that an inspector from the Health and Safety Authority (HSA) could determine that there were indeed other feasible and safer means.

As when dealing with any emergency extreme caution must be taken! When it comes to the use of cranes in many cases advanced rigging techniques may be required to prevent movement of the crane from putting undo stress on the rescue system and its components. Rescuers should also evaluate if the movement would unintentionally “take-in” or “add” slack to the attached rescue system, which could place the patient in harm’s way. Sudden movement of a crane can take place on multiple planes – left-right, boom up-down, boom in-out and cable up-down. If movement must take place, rescuers must evaluate how it might affect the operation of the rescue system.

Of course, one of the most important considerations in using any type of mechanical device is the stability, strength and ability (or inability) to “feel the load.” If the load becomes hung up on an obstacle while movement is underway, serious injury to the victim or an overpowering of system components can happen almost instantly.

No matter how much experience a crane operator has, when dealing with human loads, there is no way he can feel if the load becomes entangled. And, most likely, he will not be able to stop before injury or damage occurs. A skilled banksman with an effective means of communication is also essential.

Other factors to consider are wind speed, lightening, fog and poor lighting. These can hamper the rescue operation and increase the overall risk of it going wrong.

For rescuers, a crane is just another tool in the toolbox – one that can serve as a temporary, stationary high-point making the rescue operation an easier task. However, using a crane that will require some movement while the rescue load is suspended should be a last resort. There are simply too many potential downfalls in using cranes. This also applies to fire department aerial ladders. Rescuers must consider the manufacturer’s recommendations for use. What does the manufacturer say about hoisting human loads? And, what about the attachment of human loads to different parts of the crane or aerial?

When a Crane is the Only Option

There may be cases in which a crane is the only option. For example, if outside municipal responders have not had the opportunity to complete a rescue plan ahead of time, they will have to do a “real time” size-up once on scene. Due to difficult access, victim condition, and/or available equipment and personnel resources, it may be determined that using a crane to move rescuers and victims is the best course of action.

Using a crane as part of a rescue plan must have a pretty rock-solid, written justification as demonstration that it is the safest and most feasible means to provide rescue capability. Planning before the emergency will go a long way in providing options that may provide fewer risks to all involved.

Conclusion
So, to answer the question, “Can I include the use of a crane as part of my rescue operations?” Well, yes and no. Yes, as a high-point anchor. And, no, the use of any powered load movement will most likely be a no-no without rock-solid justification. The question is, will it be considered a “de minimis” violation if used during a rescue? Most likely it will depend on the specifics of the incident. However, you can be sure that it needs a valid justification as to why using a crane in motion was considered to be the least hazardous choice.

For more information on using cranes for rescue or to speak to one of our heavy lift experts, please contact us today.

We use cookies to ensure that we give you the best experience on our website. If you continue to use this site we will assume that you are happy with it.OkPrivacy policy