The Effect of Wind on Lifts

The effect of wind is a relatively new consideration when planning a lift.  For years crane work was carried out in cities within the skyline of the surrounding buildings that provided a wind break.  As cranes became bigger and in turn the height of the lifts, the level of exposure for both was increased and none more so than in windfarms. This was a turning point. Here you had the largest cranes, lifting items that were designed to catch wind, in areas that were exposed to gusts. These were big lifts that were planned carefully as always but a number of accidents where the crane overturned were occurring and it didn’t make sense.  That’s when engineers turned to investigate the effects of wind.

Wind hadn’t been ignored. Crane manufacturers had taken account of wind speed limits to work within when designing their cranes and given certain wind speed limits for every configuration of boom. Every operator has these manuals containing all possible configurations each with its own wind speeds. The problem was when the crane turned over in these accidents they had been operating within those limits. There was something being overlooked.

Liebherr came up with a calculation that has since been written in to the British Standards BS7121 Part 1: 2016.

So if the projected area of the load is exceeding 1.2m2/t….

The wind speed for the lift plan is the lower of the two wind speeds.

Just look at the example below of two objects that differ only by projected area. There is a considerable difference in allowable wind speed rates for the lift. 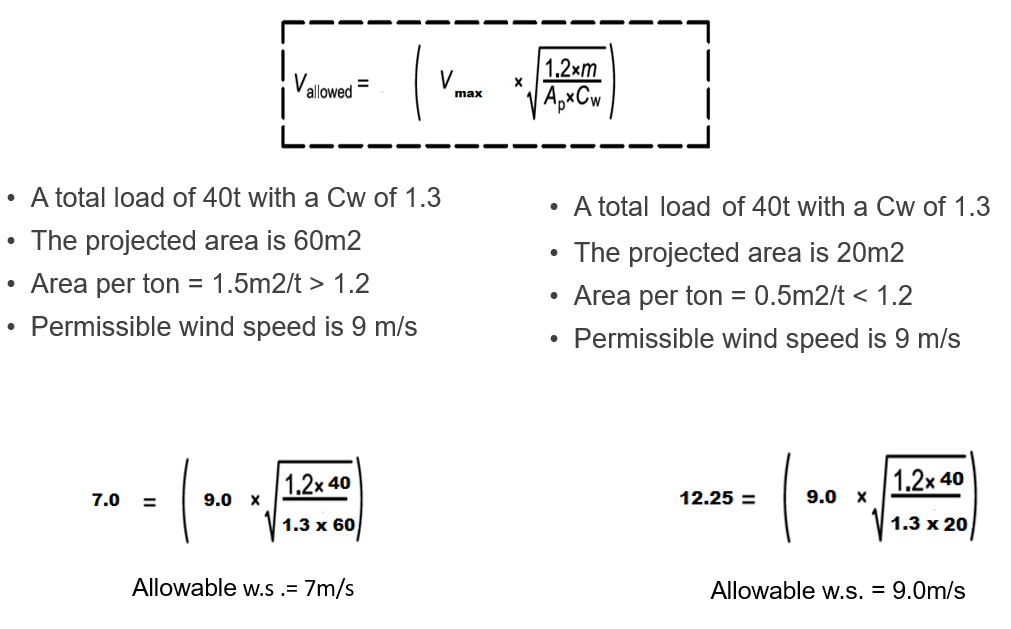 As a rule of thumb the British Standards BS7121 Part 1: 2016 have said that if M/Ap>2 then go with the crane’s permissible wind speed.

What is the drag coefficient?

Nearly all large packaged goods that are to be lifted in place by cranes come with a mass and a drag coefficient these days. It is either included in the delivery or issued by the manufacturer by request but the British Standards have included a table offering coefficients for the main shapes of lifts from cubes and plates to turbine blades which vary from 0.05 to 2.0. However it is down to the lift planner to make the ultimate call as these are only guidelines.  If unsure, it is suggested to use 2.4 but this can bring your allowable wind speed down to a very restrictive level to work within and it may be worthwhile to research the correct number.

Where has this brought lift planning?

One can argue that lift planning has an additional complexity and perhaps puts additional responsibility on the appointed person planning the lift.  Now the load is seen in terms of dynamics and not the solid object at the end of a hook block but it has also given crane manufacturers greater insight into how lifts can be effected by its environment and that can only mean greater possibilities.

The Influence of Wind on Crane Operations by Liebherr

We use cookies to ensure that we give you the best experience on our website. If you continue to use this site we will assume that you are happy with it.OkPrivacy policy